A BITE OF DANISH CULTURE

The hotdog stand is a Danish culture institution

The hotdog stand is an important part of Danish culture with the quality of being able to gather the people. It’s all about coziness, humor and conversation between people across social classes. It is informal and a part of the Danish popular culture.

What is a hotdog stand?

A hotdog stand has wheels underneath and it is completely self-sufficient. This means that it doesn’t need fixed power and water supplyand it can be charged up. It can have its own engine and the whole thing can be packed away during about 15 minutes. 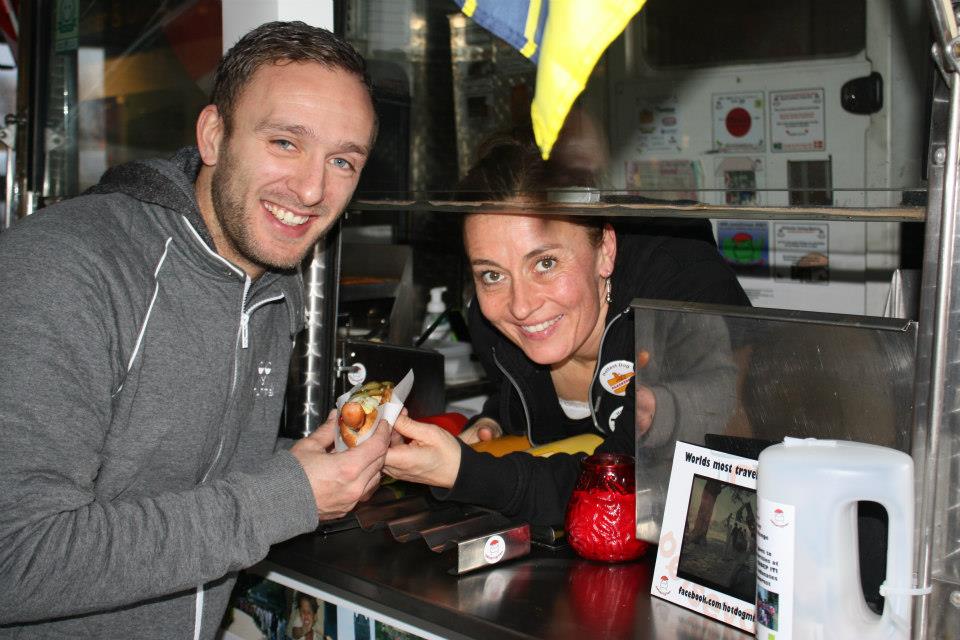 Since the 18th of January 1921 the hotdog stand has adorned the Danish streets. That was when a red sausage with mustard on the side cost 0,25 DKK and if you were to splash out with a roll, you could buy this for a mere 0,05 DKK. Today a sausage cost 11 DKK and a bred is 3 DKK and on the side you can have both ketchup, mustard, remoulade, raw onion, crispy fried onion, marinated cucumber salad and different dressings.

Because the hotdog stand came to Denmark from Germany the sausages you could buy at the stand was from Bayern.

This information is collected from “Café Fodkold”, which is written by Allan Mylius Thomsen.

This information is from a research in the spring of 2003 subject to change.

On Tuesday the 18th of January, the first sale of sausages takes place in the streets of Copenhagen from six mobile hotdog stands. Since then the hotdog stands have spread to the rest of the country.

Through the later years the Danish hotdog stand has had a hard time in Denmark and the number of stands has fallen drastically since the 1950s and the 1960s. In this period there were around 500 stands in Copenhagen alone and 500 in the rest of the country. This information I’ve been given by Allan Mylius Thomsen, who is the author of “Café Fodkold”.

According to Ove Kjeldsen from Tulip it is really difficult to name the precise number of how many hotdog stands exist in Denmark. This is because there are both public and private hotdog stands and it is only the public ones that the commune has a register of. He can establish that there has been a decrease of hotdog stands during the later years.

Even though it is difficult to make a precise number, there is thought to be around 139 stands around the country today and both Ove Kjeldsen and Allan Mylius Thomsen agree on this estimate.

According to Hans Jørgensen Sørensen who is clerk at Technical Directorate of Copenhagen Commune, there are 75 stalls for mobile hotdog stands in public areas in Copenhagen and out of these 25 are sharing stalls. This means that there are around 100 stands in total. Furthermore, he says that there are 10-12 stands in Frederiksberg Commune.

According to Ove Nansen from Technical Management of Aalborg there are 4 stands in the city of Aalborg.

In Kolding there are two mobile hotdog stands according to the Technical Management of the Commune.

In the center of Odense there are three mobile hotdog stands according to Åse Hansen from Straksbutik, who manages stalls.

THE REASON FOR REDUCTION OF THE NUMBER OF HOTDOG STANDS

The decline of the number of hotdog stands is, among other things, caused by the fact that the mobile hotdog stands are being transformed into stationary stands, which makes gives them the opportunity to expand their selection. The reason for the restructuring is that it’s difficult to survive merely on the sale of hotdogs. This information I’ve collected from the administrator of hotdog stands in Odense C, Aase Hansen.

Another thing that makes the hotdog stands disappear from the streets is the fact that the communes won’t grant stalls the stands.

An example of how the politicians favour renewal of the city rather than hotdog stands is to find in Aarhus. The hotdog man in Telefontorvet has lost his licence to keep his hotdog stand in the street, because of city renewal. He has applied to be given a new place in Aarhus C, but has been rejected by Aarhus Commune. As a result, he packed the hotdog stand away for the last time at the 30thof December in 2002. And so, there are no mobile hotdog stands left in Østjylland.

THE WORD HOTDOG ORIGINS FROM…

Food historians recon that the idea of putting a sausage in a bun origins from the German Johann Georghedner. He called this food “dachshund”, and in the 1600s he sold it from his booth in Frankfurt. In 1871 the immigrant Charles Feltman brought the idea to New York, where he started selling dachshunds. In 1903 on a cold winter day in New York, the chocolate seller Harry Stevens was unable to get rid of his ice cream and cold drinks because of the winter cold. He then got the idea of selling dachshunds with heated bread, while shouting: “They’re red hot!”

The newspaper drawer Tad Dorgan heard him and made a drawing of a happy, barking and sweaty sausage in an oblong bread. As he couldn’t spell dachshund, he wrote “hot dog”on the drawing. And this is how the popular food got its name.